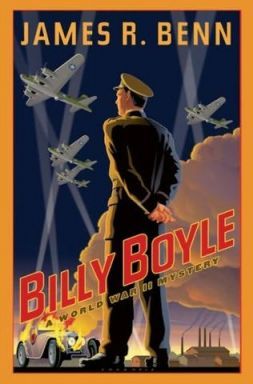 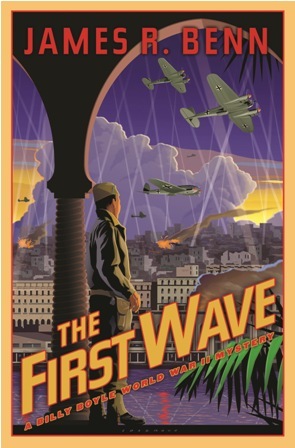 Billy Boyle and The First Wave

BILLY BOYLE tells the story of Billy’s transformation from a self-centered wise guy, interested only in his own survival, to a reluctantly heroic figure. Typically American, Billy never loses his disdain for authority or the cynicism of a city cop as he slowly grows into his role as Ike’s secret investigator. The climatic scene of the story takes place in Nordland, along the rocky coastline and the rugged mountains of this northern-most province in Norway. Nordland, the land of legends, a distant place to which a hero must journey to seek the truth, and which reveals to him his true self, changing him forever. It is here, where according to the Norse legends, ‘by a strand of corpses…heavy streams must be waded through by breakers of pledges and murderers’.

In THE FIRST WAVE, the second title in the series, Billy finds himself in the lead landing craft of the invasion of French Northwest Africa on a wet November morning in 1942. Having wished for a safe desk job, he finds that his police background and family connections have instead landed him in the role of Special Investigator charged with looking into low crimes in high places for his “Uncle Ike”. With one mission already under his belt, Billy finds himself in the vanguard of the first invasion of the war and rapidly entangled in French politics as Allied forces attempt to ready themselves for Rommel’s vaunted Afrika Korps.

"The foggy seas and echoing cannons of World War II have long lured mystery writers. Against this backdrop, Ken Follett and John le Carre built their reputations....James Benn conjures up the intensity, paranoia, strength and sadness that marked the era and secures his own standing in the genre."
- Hartford Courant, October 29, 2006

"If you enjoy World War II mysteries...you'll love this book. It's a whodunit, a spy story and a thriller all rolled into one. Told in a crisp, breezy first-person narrative, Billy Boyle makes excellent use of Benn's extensive research into time and place. The realistic dialogue pulls you even further into the action. All in all, this is one of the best books I've read this year."
- Mystery Scene magazine, Fall 2006

"Deftly plotted and beautifully written...it's rich in historical detail; it's a thrilling mystery; and the characters are fully realized, each with their own plot line and back story."
- Crime Spree Magazine, Fall/Winter 2006

"The First Wave finds Boyle coming ashore in the 1942 Allied landing in French North Africa. He's on a dangerous, if vague, mission to rally support from officers in the Vichy government forces in Algiers and to free a group of French resistance fighters, his English girlfriend among them. A better cop than secret agent, Boyle also gets wind of a smuggling ring that's depriving soldiers of the new miracle drug, penicillin, and during the course of his investigation discovers that even in the middle of a war a combat hospital offers no refuge from noncombat crimes like drug trafficking, high-stakes gambling, rape and murder.
In granting Boyle a measure of maturity, Benn takes care not to put a muzzle on him. The brash kid from Southie is still open, direct and fearless in his manner (and in his wonderfully loose-jointed use of the English language) and in no danger of losing his cover as a "happy-go-lucky Yank." But even amid the excitement of the spirited wartime storytelling, Benn allows Boyle’s experiences to change him in ways both subtle and dramatic. Becoming sensitized to the status of female officers -- paid half the salary of men, unable to issue an order to the lowliest private and denied the dignity of a salute -- is one of those subtle ways. Seeing himself from the perspective of a people whose country his own has invaded is a more striking leap for Boyle, as is his new willingness to judge foreigners by their own standards. In one painful moment of introspection, he even questions his family’s rigid beliefs. Where he comes from, that’s real bravery."

--Marilyn Stasio, New York Times Book Review
"Benn paints a vibrant and realistic Algerian landscape -- palm trees lining city streets that narrow into hard-packed dirt roads outside the French section. It is a Camus-like mixture of beauty and horror; of unrelenting sun and clear blue sky and sparkling seas clouded by dust, flies and rotten fruit. Church steeples and pristine stone buildings are flanked by mud homes ... What propels the novel is the psychological tension. As Boyle adjusts to the shifty code of morality at war, the necessary compromises, he tries to maintain his personal convictions of right and wrong. Boyle is suddenly off-balance, but also acutely perceptive. While hanging on to his basic belief in the Allied cause, he singles out the traitor ... Boyle's pursuit of justice, a promise he's made for love and revenge, keep The First Wave ablaze."
--Jenny Minton, Hartford Courant review

"Take a young Irish cop. Turn him into a lieutenant on Eisenhower's personal staff...set him ashore on the coast of French North Africa along with the first wave of invading American troops. And watch the mayhem, mystery, and murder that are bound to follow...Benn follows up his first World War II mystery (Billy Boyle) with another danger-filled episode and delivers a cross-genre tale that is at once spy story, soldier story, and hard-Boyled detective. Bullets, babes, and bombs give Billy Boyle a bad time before he solves the case, but you'll have a good time reading about it. Highly recommended for all mystery collections."