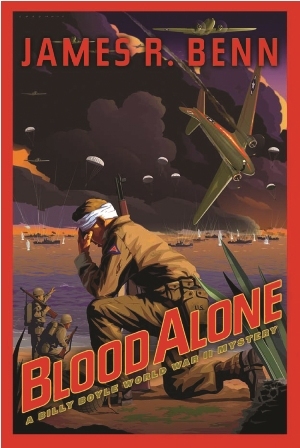 Blood Alone finds Billy Boyle ashore in Sicily immediately following the invasion. Awaking in a field hospital with a bandaged head and a case of amnesia, he must struggle to learn his identity while staying one step ahead of the shadowy figures pursuing him. Discovering who he is becomes an odyssey as he wanders the island following what clues he can pick up, on the trail of killers, thieves, and perhaps...himself? Against the historical backdrop of the Allies' secret cooperation with the Mafia, the plot plays out featuring mobsters such as Vito Genovese and Don Calogero Vizzini, head of the Sicilian "honored society".

"Characterization and atmosphere carry Benn's third WWII mystery (after 2007's The First Wave), a convincing blend of fact and fiction. As part of the Allied invasion of Sicily in 1943, Billy Boyle, a freewheeling Boston cop in civilian life now working as special investigator for General Eisenhower, bears a message from the real-life Lucky Luciano to the head of the Sicilian Mafia asking that he order local soldiers to stop fighting American troops. Unfortunately, the chaos of warfare interferes with Billy's mission, as does another mobster out to exploit the situation for money who plots to have Billy killed -- while Billy is wounded and suffering from amnesia. The hero's gradual rediscovery of his memories lets him question what kind of person he is, in particular whether he's more than a brutal killer. Benn also does a fine job of depicting a dusty, poverty-stricken Sicily, where warm loyalty is the reverse side of pitiless vendetta."

Immediately engaging...Blood Alone is an intriguing blend of history and fiction, superbly crafted and paced, easily the best period mystery I've read in quite some time.

...a well-engineered tale...with a keen eye on details...the best of a war story as well as a mystery. Thoroughly enjoyable, and recommended.

In war-torn Sicily, a sleuthing soldier risks life and limb to crack a baffling mystery...Billy's determination to learn the truth takes him into the heart of Sicily's complex criminal dynasty, as deadly as the encroaching German army. Another bracing cocktail of period action with a whodunit chaser from the increasingly authoritative Benn.