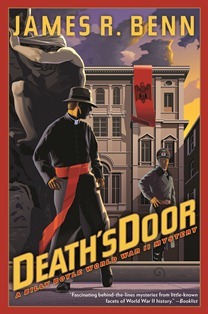 From Library Journal:
This seventh mystery in Benn’s historical series (after A Mortal Terror) finds Billy Boyle, a Boston police detective turned Allied intelligence agent, awaiting orders in southern Italy early in 1944. He and Kaz, his Polish partner, are ordered to Rome to investigate the death of an American monsignor in the neutral Vatican. Boyle also has an ulterior motive in that the woman he loves has been captured by the Nazis and is being held in Rome. Disguised as priests, the two agents make their way to Rome and soon find that the Vatican is full of escaped POWs and other refugees from the German occupation. Everyone has an agenda, and motives are hidden under layers of piety and diplomacy. VERDICT Benn has obviously done his research; the authentic details of Roman life during wartime add to the tension without overloading the reader. A couple of cameos by real historical figures also are handled well. In addition to series fans, this will appeal to readers who enjoy mysteries and thrillers with a dramatic setting such as the Second World War.

Booklist review: "This seventh installment may have the most intriguing premise yet…teeming with dramatic possibilities. Vatican City proves a compelling setting, awash in internal politics and straddling gingerly its tenuous status as neutral territory…the history and the many real-life characters add up to great reading…"