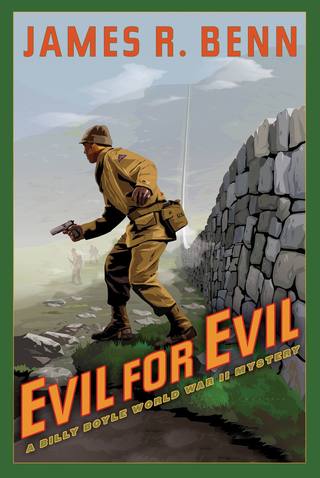 Billy Boyle is sent to Northern Ireland, at the request of the British government, to investigate links between the Irish Republican Army and the Germans. Automatic weapons have been stolen from a U.S. Army base, and an IRA man has been found dead, shot in the head and left with a pound note in his hand; the mark of the informer. Billy is forced to confront not only danger from German agents, IRA killers and Unionist thugs, but also his own family history, which reaches back generations to the starvation days of the Irish Potato Blight.

Fans of historical mysteries and World War II buffs will savor “Evil for Evil,’’ James Benn’s latest series novel with Billy Boyle…Rich in its exploration of Irish history and politics, this is also a character study of brash young man trying to balance personal, family, and political loyalties while staying true to himself. —Hallie Ephron, The Boston Globe

"A twisting, turning plot drives Benn’s gripping fourth WWII mystery to feature Lt. Billy Boyle . . . As an Irish-American whose family is sympathetic to the Republican cause, Billy struggles to remain impartial as he investigates the various factions on both sides of the Catholic-Protestant divide. Benn offers no easy answers in this rich mix of Irish history and wartime intrigue."—Publishers Weekly


"Benn handles the Irish question effectively, giving context to the “troubles” and capably showing how WWII introduced an explosive new element to an already volatile situation... this remains an entertaining series based on fascinating historical premises."

The Yanks don’t do war like the Brits, and James R. Benn’s World War II mysteries are a case in point. In the first three novels in this lively (and surprisingly thoughtful) adventure series, Benn’s hero, Lt. Billy Boyle, a rookie Irish cop from South Boston, was still a “rosy-cheeked youth” under the protection of his distant relative, “Uncle Ike,” who sent him on exciting secret missions where he made exotic friends. It was dangerous, but it was also a lot of fun. Billy is still the charmer in EVIL FOR EVIL (Soho, $25), which lands him in a United States Army arms depot in Northern Ireland, investigating the theft of a shipment of 50 high-powered rifles. But war can take the romance out of boyish ideals, and Billy’s loyalties to his ancestral sod are tested when he finds himself working with British and Ulster authorities on a tip that the I.R.A. stole the weapons, possibly with German help. Characters as distinctive as their fine-tuned slang walk Billy through the thickets of this treacherous political landscape. Only when he’s made peace with his conflicted soul (“I felt guilty, wishing God hadn’t given me the sense to see two sides of a thing”), can he recognize this divided country for what it is: home.