Where to order The White Ghost 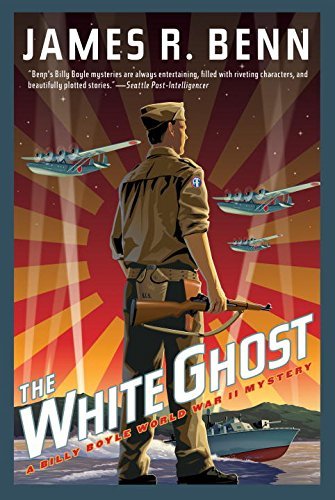 “Billy Boyle gets better and better. This is a must-read series.”
—Lee Child

“A complex tale that maps the human cost of warfare in the South Pacific—and delivers a deft portrait of a young Jack Kennedy struggling to recover from the losses of PT-109. Poignant and riveting.”
—Francine Mathews, author of JACK1939

"Remarkable . . . Benn’s research gives readers a you-are-there feeling about that long ago war, but the strongly developed characters always remain front and center. Readers will assume—with good reason—that our future president will not become the villain in The White Ghost but Benn maintains suspense as we see both the charm and the ruthlessness of Kennedy."
—CT News

"The White Ghost is a strongly conceived, brilliantly executed murder mystery, interweaving real-life historical figures into a fictional storyline. This is one of the best series mysteries currently being written, and each new book is better than the last."
—Mysterious Reviews

"One fun aspect among the multiple glories of the Billy Boyle World War II mysteries is the author’s clever and creative way of interjecting actual historical figures into the plots."
—The Day

"[Benn's] characters are wonderfully drawn, especially his star duo but also in this case also Jack Kennedy, not the easiest historical figure to capture convincingly. And his picture of the world of the Pacific Theater of the Second World War is terrifically evocative . . . The White Ghost [is] a delicious summer hour’s read."
—Open Letters Monthly

"The tension between a murder investigation and wartime action has always been at the heart of this series—How can one killing matter in a world where hundreds die every day?—but here it is ramped up to a new level, in terms of both suspense and character development. Working with recently declassified documents about the Solomon Islands Campaign, Benn spins an absolute corker of a war story. The best of an always satisfying series."
—Bill Ott, Booklist, Starred Review

"Benn does a good job of capturing life under the constant threat of Japanese attack—and depicting the Kennedys as flawed human beings."
—Publishers Weekly